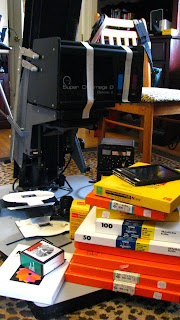 Thank goodness for getting-around-to-it kinds of weekends. Long story short, we've had the darkroom set up in the new place for months now, but there wasn't time (or, really, a good excuse) to test it out. And truth is, I tend to avoid change (or learning new things) and I was still used to working with the much smaller, far less high-tech enlarger we'd picked up two-plus years ago for 30 bucks at the junk shop in Maine.

Fast forward almost two years:  Having little (read:  nothing, really) completed in prep for my CCCC presentation (and having become increasingly worried about being in that nothing-really kind of state) provided me with an excuse to get into the darkroom again and (more importantly, perhaps) to learn how to use the much bigger, much scarier, enlarger.  Briefly stated, my presentation will center on the idea of giving voice and movement to (or making one's own) strangers' otherwise silent/static memory objects.  Though I'm still not sure where I'm going, I had a sense of how I wanted the piece to begin.  To this end, I spent most of the week going through a collection of found negatives, ultimately deciding that I'd work with this image--one of a father, his two daughters, and headless wife. 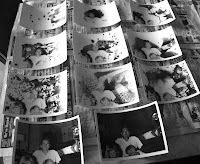 As a means of underscoring visually something of the difficulty, mystery and, indeed, frustration, of working with other people's memory objects, I wanted to make multiple copies of the image, using a selective development technique to reveal only portions of an image at a time.  The argument here is basically that you get to see/recognize/put into a kind of order that makes sense only small portions of those faces, bodies, lives and experiences at a time.  But the more you look--that is to say, what you think you know at a given point in time is often complicated when you try to factor in other items in the collection. In this way, things often seem to become clearer, only to then get all muddied up, confusing and obscured as other things as revealed.  I want to suggest that working with still images, as I'm doing here, allows you to see different things in different ways and at different times but, of course (and here's one of the main points of the presentation), those things always remain still, always silent. Again, what I hope to do with these strangers' stills is to provide them movement, sound, juxtapose them with other stories.


Dealing with two things I'd been putting off for far too long (again, learning the enlarger, committing to an opening visual for my presentation) made it easier to take on a third--trying my hand at sabattier.  (too) Simply put, this technique involves exposing developing film (or paper) to a light source during the development process to achieve a psuedo-solarization effect.  I had tried my hand at this once before, but I wasn't using the right kinds of chemicals and the prints ended up a muddy mess.  I picked up some Solarol in a photo shop in St. Louis about a year ago--this is, in fact, the right kind of developer for this process--and decided to mix some up this weekend.

New processes, especially those that involve chemicals (or sharp objects and/or fire) are always scary business for me--I worried that I'd botch the mixing, that I'd poison myself (or Chris or the cats, or Dorothy).  And then there is the business of mastering the mechanics of the process:  Were we using the right filter?  Were our exposure times off?  Were we using the right development times? Was the light we'd use to flash the half-developed prints at the right height, the right wattage? etc.  It bothered me too that we'd likely waste a lot of paper learning this new technique. [A somewhat silly concern since we've been hoarding paper like crazy for the past few years and probably have more than we'll ever have a reason to use. . .but still.  I worried about the waste, but ultimately reasoned that wasting stuff is often part of the learning process.]  It took us a couple (well, really, more than a couple) tries to get our timing down, but we were happy with the results.  Otherwise put, most of the images didn't look like they'd been developed with regular developer and we never dropped the secondary light source in the developer tray.  For our first few attempts we worked with b/w negatives--it's what we had handy (see images above, left).  We then dug out and switched to infrared images as they tend to provide more interesting or extreme results (see two images below). 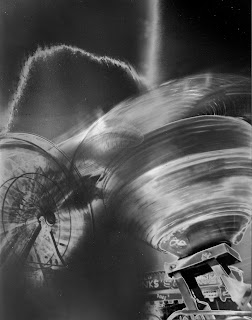 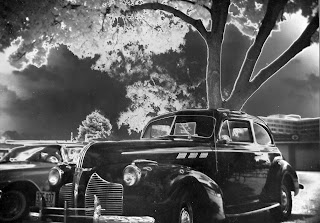 I was curious to see what the developer would do as it became increasingly exhausted. (We'd developed at least 30 prints with the first batch of chemicals--most prints were 5x7 but a few were 8x10.)  I'd read that the pseudo-solarization effect would become more extreme as the chemicals became more exhausted.  With a mind to not wanting to waste more stuff than I had to, I was curious to see what exhausted AND day old Solarol might be capable of.  Given that most mixed developers are only good for about eight hours (or so they say), I didn't expect that the day old chemicals would produce any kind of image. . .at least not in a timely fashion.  I was surprised, however, to find that we were able to produce more images the next day and without having to alter our exposure or development times (see infrared image above, left).


Exposure times are, of course, predicated upon paper speed and negative thinness or density, but what we seemed to be finding is that the shorter exposure times resulted in the more extreme (solarized/reversed) images. Also, with a mind toward using chemicals past suggested times, I'd note here that after 24 hours the mixed Solarol was turning a bit dingy, but still was mostly clear.  After 36 hours it had become very dark--purplish.  I expect it has been pushed far past its use and I doubt that I could get an image from it today.

Next up on the experimental front:  Fun with Liquid Light.
Posted by remediate this at 10:43 AM No comments: