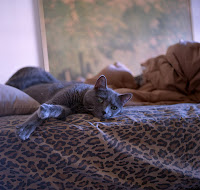 i love this camera. sure, like the diana+ it too can be a little quirky and (at the risk of comparing a cheaply-made plastic cam to a really, really heavy, solidly-built tlr) i'd argue that the ikoflex, like diana+, is a fairly high-maintenance camera. that said, it seems that the aspects that make the iko-iko sometimes difficult to work with are opposite of the things that make diana+ difficult to work with. for instance, while i worry about dropping (and breaking) both cameras, diana+ feels like nothing much while you can definitely feel the weight of the ikoflex. and people actually wore these around their necks? yipes. the ikoflex is definitely not a strollable camera--not one you'd (or I'd) grab and take on a nature hike. 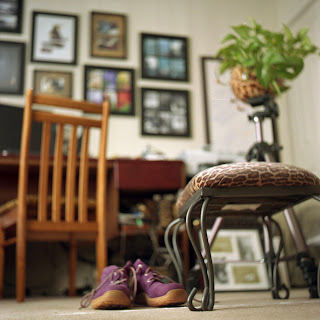 but i do love the photos it takes. i remember vividly when the first batch of negatives came back. i had been used to working with the holga, diana+ and the flipped-lens bhf and the sharpness of the ikoflex images, the way they seemed almost 3-D by comparision, was really jarring--but in a really good way. 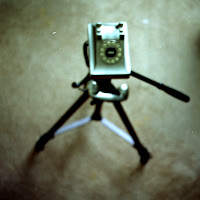 . . .and even when the images are not that sharply in focus they are still interesting to me. (in my defense, it was really, really hard to hold this thing above my head while trying to compose, focus, etc. the shot. i tried a second shot but by that time my arms were shaking so much, well, that one was blurrier still.)


i'm not sure how or why i began thinking about the ikoflex since i had been on this russian camera kick at the time. i think i might have been researching lubitels when i came across this most excellent resource --a site that ended up serving (for the better part of the summer anyway) as a shopping/wish list generator of sorts. if i saw an image on flickr that i liked, i'd check to see if the camera was listed on the site and if the feedback was good, i'd go to ebay to see if one could be had and (if so) how much it might be had for.

when i saw the zeiss ikon ikoflex listed on ebay, it was originally listed as a Ia. but it's not--it's an early model IIa from 1950. while waiting for the camera to arrive, i downloaded and began looking at the manual for the Ia--i had been cautioned that this camera can be tricky to load and i wanted to get my mind around what i'd need to do to avoid loading problems and botching rolls of film. once the camera arrived things didn't necessarily translate from the manual to experience and it took a while for me to figure out that the camera i had in my hands was not, in fact, a Ia.

as i tended to spend the summer buying cameras in pairs (the holga and the diana, the zorki 4 and the kiev am), i was, at this same time, hoping to pick up a reasonably-priced yashica-D. i remember vividly hauling both cameras, my tripod and my digital camera (aka "light meter") up to campus on really, really hot day in June, eager to shoot test rolls with both cameras. yipes. definitely not strolling cameras.

the ikoflex is tricky to load--after you've wound the film on, you have to manually position the counter on the side to "1". if you forget this step, iko-iko acts up. problem is, the manual says that you are supposed to move the counter clockwise but i'm not thinking my likes moving in that direction. then again, i had a few botched shots with yesterday's film--times when the film advanced a bit beyond where it should have stopped so maybe i should have insisted we moved in a clockwise direction.

the viewing glass is really, really bright (making the iko more enjoyable to work with than the ysahica) but my ikoflex's duds are a bit worn and ragged in places--it could definitely use a new outfit (maybe something in saddle tan?)--but i find particularly daunting the idea of diy camera recovering. maybe it's something i can work up the courage to attempt next summer.
Posted by remediate this at 10:26 AM