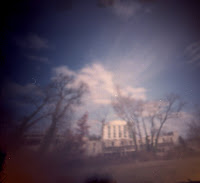 cause i definitely didn't have beginner's luck with my pinhole adventure and after this second-go round, i'm thinking that this is the way i'll be going in the near future.

i was feeling decidedly hopeful about the second test roll since i had (at least from my perspective) made the second pinhole at least 1/2 the size of the first. since the images on the first test roll were all over-exposed, i kept with the same exposure/time guide, thinking the images on the second roll would be closer to normal. no dice. problem was that i took a good number of shots outside, around campus, and had little idea of what i was doing since the first test shots were all indoors. so much for controlling one's variables. and i meant to do more by way of bracketing shots with the second roll but, well, ended up not doing that either.

while i love, love, love the perspective one can get with the matchbook pinhole (reason enough to keep revamping and retesting my diy matchbook), i can't help but feel disappointed with what i consider to be the rather cartoon-like quality of the first and second test rolls. i thank goodness i shot color with these since it provides hints to what the image is supposed to be of--more or less.

while waiting for the new camera to arrive, i've been tempted to try yet again with this one--well, after creating a new, still smaller-sized pinhole. the main deterrent to this (besides having a book to write and 30-some student projects to grade and not having anything with which to make a smaller size pinhole) is the time involved with carefully uptaping and then carefully retaping the mechanism. and starting it all again from scratch, cutting up another matchbook, etc. is simply out of the question. but who knows--if it turns out that tomorrow or the next day is one of those crazy sky days (i.e., bright blue with clouds), i might be tempted to get out the electrical tape and load another test roll. 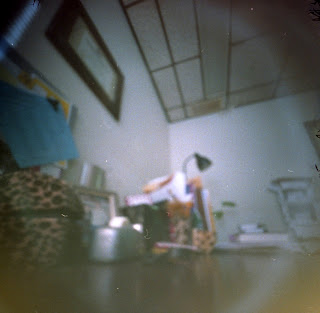 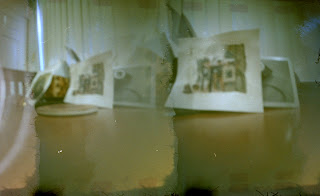 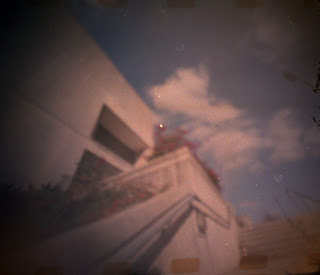 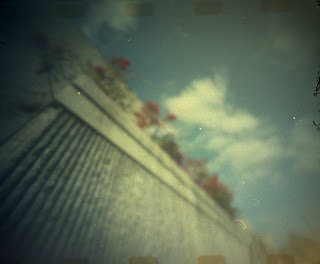 Posted by remediate this at 3:14 PM