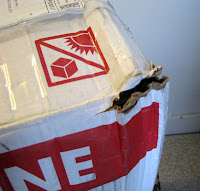 this is not the first lot of cameras i've bought from ebay and i doubt it will be my last. by and large, i've had really good luck (save the spider-in-the-praktica-viewfinder incident. . .clearly still not over that yet). stuff arrives more or less as described (or better--meaning in cases when there has film left in cameras) and it arrives fairly quickly. even the international orders have been pretty speedy. shipping, on the other hand, is usually a nightmare. 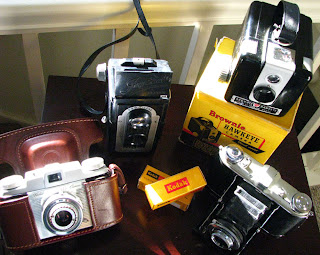 in this case, i had to wait nearly three weeks for this midwest purchase. i was willing to cut the sender some slack, given the blizzard of '10 and all but three weeks? sheesh. never mind that it tracked from iowa, to nc, to md. (still puzzled about that route.) given that the shipping was almost 13 bucks (way higher than i'm usually willing to spend) so i expected priority mail. any post-storm generosity i may have been feeling prior to the order's arrival yesterday quickly left me when i saw the pack-job. holy shit. while the first photo above does justice to the hole in the box, what it doesn't capture is how the one side of the box has pretty much caved in. double sheesh.

the thing that sucks about waiting for cameras (at least for me) is not that i'm particularly eager to test them or that i particularly need anything i've ordered. it's more a matter of wanting what i want when i think it should arrive. so prior to the time the mail is typically delivered, i'm all sweetness and light, thinking today will be my lucky day. when i learn that the package hasn't arrived, i become a petulant seven year old child who spends the rest of the day pouting and imagining all the cool things i could have done with the cameras i don't particularly need, that i'm not actually in a big hurry to use. and so it goes.

the big fun begins when the order arrives: have i bought a pig in a poke or no? if things aren't working well (at all?) or if the cameras are in rough cosmetic shape, will i be able to get things working or looking okay again?

in most cases, the seller can't vouch for the quality of the items (i.e., stating that they are "estate finds" and have not been tested but appear to be okay or something along those lines), so it is a gamble. again, getting more or better than one expects is a good thing. getting a dead spider in the viewfinder of a camera the quality of which the seller did vouch for (said it worked well, everything functioned) makes for a long, pissy, regretful kinda day. with this lot, no claims were made about the quality or functioning of the items featured here, but the images the seller featured all looked pretty good, save perhaps for the imperial reflex duo lens--one of the reasons i wanted the lot in the first place. in this way, buying this lot represented more of a gamble than i'm usually willing to take.

despite the piss-poor packing job (definitely not worth 13 bucks), all but one of the cameras remained in its bubble wrap. the agfa b2 commander (the folder in the bottom right corner of the image above) was loose in the box but arrived closed and so in one piece--no damage to the bellows. everything looked pretty good on the agfa. the lens could use a little more cleaning and i struggled to get the lens element apart to do that--so far, no luck. i'll also need to find something to put over the film counter window in the back. there's some yellow plastic there now, but it almost appears that the normally red material featured on the backs of camera that take film with paper backing (i.e., 120/127) has been chipped away. bottom line, shouldn't take much to get this one into decent working order.

the brownie hawkeye flash (top right of image) was incredibly clean and the box it came in was in pretty decent condition. when i took off the back of the bhf i noticed that there was a lot of powdery white substance on and around the lens--something i definitely hadn't been expecting given how clean and shiny the camera was. i took the camera apart so i could clean (and then flip) the lens. bonehead move number one: for some reason, i decided to test the shutter while the camera was apart. this caused one end of the tiny spring that connects the shutter release button to the shutter proper to come loose. i got that back in place and then decided to try the shutter again. bonehead move number two: this caused both ends of the spring to come loose. to make sure that i put this together properly, i had to take apart another of my bhf. it took me about 10 minutes to get the spring in place (again, the spring was incredibly tiny!) but the camera looks great and it even takes 120 without any effort. bonus. oh, and speaking of bonus, inside the brownie box were two rolls of kodak verichrome pan 620 (exp. dec '74). i actually new that these came with the lot. along with the imperial, the rolls of vp 620 were also another reason i was willing to gamble on this lot.

the kodak pony 35mm (bottom left) looked just as good and clean as the bhf. and it came with it's own case. the best part is that it's a working pony. i've ended up with a pony or two from previous lots and they've never worked. this camera was, in fact, the first one i tested of the lot.

as for the imperial. (sigh) it was pretty dirty and perhaps most disheartening of all was the fact that the shutter only half-worked. meaning that it only worked correctly half of the time. another odd thing was that the shutter release lever appeared to have been bent backwards. the item was packed well with bubble wrap so i didn't think it had been damaged on route to me. fortunately i didn't mess with the lever till i looked at other images of the camera i found on flickr. apparently this is how they were made. i unscrewed the four screws on the front of the camera, removed the front plate but was bummed to find that that was as far as things went. otherwise put, i'd been hoping to get to the shutter on this most-plasticky camera. i began cleaning the outside sides of twin lenses and in the midst of doing this, i must have moved the camera in a fortunate way as the plastic piece beneath the frontplate fell off and i was able to get to the shutter. oiled that a bit and the shutter is functioning wonderfully and consistently. with the front plastic piece removed, i was also able to clean the mirror and the other sides of the lenses. the camera is actually looking pretty good. i was bummed, however, to learn that i will definitely need 620 for this one. usually i can get away with 120 film in the supply side of 620 cameras (i.e., as i can with all the bhf's i have) if i cut the ends of the 120 rolls but in this case, i'll need to respool 120 onto 620 spools. i've never attempted to do this before but figure that if i learn to do it successfully it will allow me to film-test a few other tlrs that i've only ever had occasion to use for ttv photos.
Posted by remediate this at 9:51 AM