Or perhaps more simply, the online descriptions for the cameras and shutter releases might be described specficially as having (or fitting) the centered vs. decentered tripod mount. Holgas aren't expensive, per se, but they ain't cheap. Ditto for the shutter release adapter. Add to the costs, the frustration of receiving an incompatible item and the wait time (and perhaps extra costs for return shipping for items). Blah. Really frustrating. Meanwhile, I'm still waiting to experiment with infrared film in the Holga. To think that I placed the order for the first Holga on July 12th. And I'm still waiting for the issue to be resolved. Maybe my goal should be to shoot Holga infrared in fall?

Anyhoot--the images below more concretely illustrate (or illustrate visually) the incompatibility of the new tripod mount and the old shutter release: 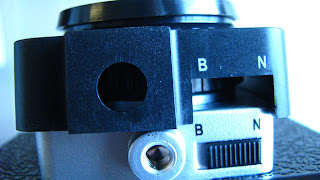 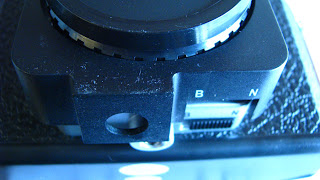