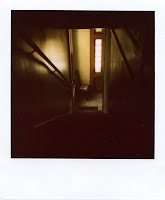 Before getting to the pola woes, I'd like to say something about pola desire. More specifically, the desire to take polaroids. For me, the desire to work with polaroid cameras--though I don't have the urge that often--is much like the desire to develop film. When I'm wanting to develop film, I don't care if the pictures are good, I don't care if there is anything I necessarily want to photograph and maybe I'm not even in the mood to take pictures, but I want (it actually feels more like a need) to go through the development process. I want to measure, agitate--I want to smell the fixer, wait through the long rinse process and then clip and hang the negatives to dry.

So I was having the pola urge earlier this week and since I really wanted to document the back stair case before I move, well, it seemed like the perfect time (and given the dramatic lighting at the bottom of the stairs, the perfect camera with which) to do so.

So I take a few shots with the One Step Close-Up using expired 600 integral film (see first image above) and then I decide to take out the Polaroid 220 and take a few more images using Fuji b/w 3000 pull-apart film (see triptych directly above). No question: I'm definitely having a goop ole' time so much so that I decide to try and sustain the pola fun through today. No bueno. Shoulda' quit while I was feeling ahead. 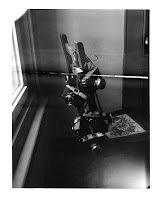 And now for the pola woes part. As it happens, both cameras started misfiring with two exposures left in each camera. The 220 seemed to jam after (or while) taking this picture of the chair with the diana cameras strung over it. More specifically, when I pulled this image out of the camera, it came out followed by 1/2 of the final exposure left in the camera. This--the overlap--I'm guessing is responsible for the white line running through the image. 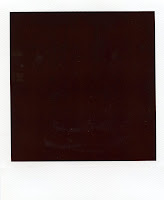 But there there was this: The two final exposures in the One Step came out like this. Blech. I believe I read something sometime ago about others having problems like this with both types of film--if I recall correctly, the problems occurred with the last shots in the film packs. Problem is, I don't recall exactly where I found those discussions. Mmmm. Guess tomorrow will involve some re-research.
Posted by remediate this at 5:29 PM

I recently got a Polaroid 220 and have had fun just starting to play with it. Do you have any tips for getting such gorgeous shots that you're getting? Are you using the flash for the interiors (I have yet to experiment with the flash)? How did you scan in the negatives in your triptych? Just wait until it dries or did you have to do anything else?

I'm very impressed with your dedication to updating the results of your tests. I've had some crazy tests with what you're calling "trashcams" but never find the time for putting them online. I really need to do that.

Thanks for the compliments, Bill.

As for the 220, I really like working with the Fuji b/w 3000 film. (And it's definitely the film to work with if you want to do the gooping technique!) No tips come to mind--just a lot of trial and error. Though I will say that I never use flash for interiors so this was just a matter of hoping the light (and the setting on the camera) was okay.

For scanning the negatives, I had to wait for the print and negative to dry and then I scanned them separately and put together the triptych in Photoshop.

And, yes, by all means--you need to get your trashcam tests online. I'd be eager to see them!

On the topics of land cams, I'm guessing you know about the Impossible Project? I've ordered some films from there (the silk and chocolate, I think) but haven't tried them yet!

Yep, I know about the Impossible Project and have been meaning to get to NYC to see their gallery. Nic from Four Corner Store (where I get all my Golden Half stuff) says that it's an incredible place. I have quite a bit of Polaroid film in my fridge--some new Fuji 100 C and BW, and 3000 BW as well as expired Chocolate that I got on eBay. I've yet to take that out just yet.

I have lots of images that need to be scanned it, but who has the time?

I just picked up a Polaroid 150 Land Camera yesterday which is in great condition. I'm hoping that one day the Impossible Project will make that roll film, or I'm going to have to find someone to convert it for me. I saw a very cool 120 roll film conversion that will make wonderful panoramic images, but I just don't have the metal-cutting tools.

Too funny. I too have picked up a couple of old Polaroids that use roll film and I even bought a dremel so I can do my own 120 mods. Just haven't had the time to practice working with the dremel yet! Once the book is done though, it'll be dremel (and mod) city for me!