I decided to dig out of storage the oatmeal pinhole camera that I made in 2008 and test it out yesterday. I begin by saying that I was really eager to test this camera--not only because I finally could (i.e., having acquired paper developer, trays, tongs, a safelight and wee bit of darkroom experience), but also because I'd yet to work with a camera that offered a curved film plane. But holy-no-good! I'm just confounded by the results. I actually opted to begin this post with what I consider to be the only decent image of the bunch and this hasn't yet been inverted or made into a positive. Things looked pretty promising with this one, in fact, when I pulled it out of the fixer. Problem was that it looked really, well, problematic, when I inverted it in Photoshop.

From what I could tell, the canister didn't have any major light leaks or other problems. I had painted the whole inside of the oatmeal container flat black when I made it and save for needing to apply a bit more black tape to the inside--I wanted to make sure that the pinhole was still securely attached to the inside of the camera--I didn't see any major issues. But my results seem to want to beg to differ. Holy yuck.

I began the test by taking a few outdoor shots. The sky was bright, but there wasn't any direct sun to contend with. My sense was that it was perfect pinhole-testing weather. I used 5x7 sheets of paper and since I knew that I wouldn't be developing them one-by-one, I just began bracketing shots--my first exposure was 30 seconds, then 45, then a minute. For the camera close-ups and indoor shots, I went a bit longer, anywhere from 5 to 10 minutes. On the bright side, I can say this: There weren't any blank sheets of paper post-exposure. In this way, I knew my exposure times were at least in the ball park. On the less-than-sunny-side-of-things, the images all had major problems in the form of weird dots and squiggles and light leaks (see sampling of images at the end of this post). One way of accounting for the oddness is that I didn't mask well or completely enough the backside of the aluminum can I was using for the pinhole. I also appear to have light leaking in around the bottom of the canister. At this point, I think I'd rather cut my losses with this pinhole and build another rather than monkey with this one.

I did think to take set-up shots during yesterday's session--this is something I've been meaning to do. . .or to do more of. It's one thing, I think, to talk about process and/or show results of a certain process but I think it can be much more helpful to actually see aspects of the process. Perhaps it was a good thing that I waited to develop most of the negatives--that I didn't shoot one, develop one, etc. Still otherwise put, had I seen the earlier results, I don't think I would have taken as many shots. And I definitely wouldn't have bothered with set-up/process shots for this session.

With the two images below, I try to provide a view of what the set-up or process looked like and I contrast this with the final result(s). I thought that perhaps camera shake/movement was to blame for some of the funkiness in the first images I created, so I used an slr to weigh down the oatmeal container. Also, instead of trying to vertically center the 5x7 paper in the canister, I pushed the paper to the bottom of the container, hoping this would make a difference. The jury is still out on that.

I did have more success and much happier results working with the 3-a folding brownie. This is, I must say, an amazing camera. I just need to get a better handle on the exposure times for this one. The image below again shows the set-up for the shot contrasted with the final shot. This was a 60 second exposure at f/16.

A sampling of the oatmeal pinholes appears below. Listed beneath each image is the length of the exposure: 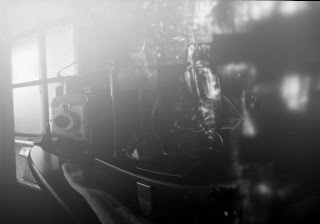 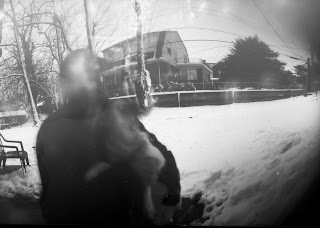 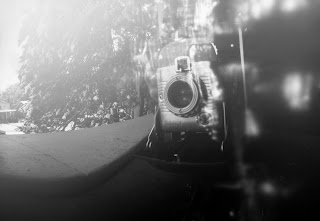 60 second exposure
Posted by remediate this at 8:38 AM