things for which one pays way too much 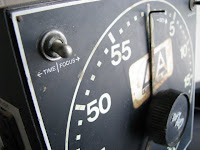 Boy, do I love a bargain. Case in point: This well-used yet still functioning GraLab timer. I've not much use for it since the new enlarger arrived, but it was a sweet deal--one that was really hard to pass up, in fact. I got it, along with an old Polaroid Land Camera for 3 bucks (yup) at a yard sale last spring. This is definitely not a thing for which one paid too much. 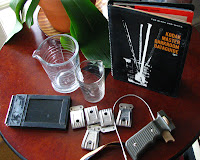 But bargains aren't always there for the having. Some junk sellers just don't want to part with their old stuff. Case in point: We paid roughly 15 bucks too much for this assortment of photo stuff yesterday. Put otherwise, for 15 bucks we got an old Kodak handbook, 5 film clips, a cut film holder (might be for 2.25 x 3.25" film), a cool-looking shutter release grip, and two glass measuring cups. Not pictured here were a handful of old graduation negatives in a Kodak sleeve and three rolls of expired film.

Okay. So maybe this stuff shouldn't have been free. These, after all, were what I really had my eye on--the glass measuring cups, especially the one marked "Kodak." But 15 bucks? C'mon. 7 bucks might have been fair.

But like I said, some junk sellers are just really tough to bargain with. Truth be told, the only reason we went back to this seller is because we happened to be in the area and because last time we were in, he had a couple boxes of photo stuff that he'd yet to unpack or price. We hoped that in the 5 months or so since we last visited, he might have had time to unpack and price. Nope. The boxes were more or less in the same place we left them months ago.

The seller invited us to offer a price for the boxes and/or to combine items from both boxes into one and offer something for that. Sounds good, but most of the stuff was, well, junk. Broken plastic measuring cups, used paintbrushes, gummed-up funnels, a 4x5 film holder that was rusty and missing one of the dark slides. You get the picture. He had a lot of old photo books that he seemed really keen on selling, but I explained that I had plenty of books and really didn't want to bring more stuff into the house.

Interestingly enough, he had a couple of old GraLab timers that he said he'd be willing to part with for 80-90 bucks each. I explained I already had one, but he kept on, reminding me that new, the timers go for 140-150 bucks. I explained that I paid about a buck for mine, thinking that this would give him a sense of what I like to spend on used stuff in good condition. He seemed not to hear me, or chose not to believe me. I went about looking through the boxes, compiling a few items that I might want, but only if the price was right. [It wasn't, as I said to start, but Chris popped for the stuff anyway--perhaps in hopes of making some kind of connection with the man in case he came across more photo stuff, stuff we actually were eager to own.]

The most interesting aspect of this particular bargaining session (and it pretty much went like this: Chris suggested a price and the man said that "that wasn't going to happen") was that the man seemed to assume that the stuff he had on hand was not only more valuable than it was, but that it was also in better condition than it was. He was also operating from the stand point that we were necessarily going to flip the items, selling them for a much higher price online. Huh? I explained that I don't purchase anything with the intent of reselling, but with the intent of testing or re-using them.

And we probably would have paid a bit more for the misc photo stuff had we not bundled that stuff with the item in the shop that I really, really wanted: This old wonderfully bizarre, wonderfully ugly carnival toy. It's not in much better shape than a lot of the stuff in the photo boxes and it kind of gets to the condition of most of the stuff in this particular junk shop (overly-worn, grimy, badly in need of cleaning). My general rule of thumb is that if I'm in a place and can't find things to take or develop photographs with, I try and find something cool to photograph. And I love this thing. Last night I had it pose for the oatmeal pinhole cam and today it's posing for the Zero Image 45 and the newly-made Paintcan pinhole.
Posted by remediate this at 2:49 PM