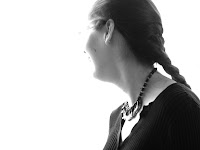 I was recently contacted by a current student who was asking for my help/input on an aspect of her final project. The student, who shall remain nameless but who, in profile, might be simply be referred to as “Braid” is working on a project that explores (by way of Robert Brooke’s work) Erving Goffman’s concept of underlife as it relates to student identity. Thus, for the past few weeks “Braid” has been contacting, via email, members of the class, asking them to bring something to class and/or do something in class that demonstrates or otherwise enacts some aspect of their non-student or extracurricular identity. Having planned on incorporating me into the project, I received an email from “Braid” who wrote (and I’m paraphrasing now): “Dr. ____, I wondering if you had any thoughts about what you might do to demonstrate aspects of your underlife? I was going to ask you to take photos in class but since you did that the other day, I’m not sure what to ask you to do, and thought you might have some ideas for me. I had thought about asking you to bring one of your cats to class, but that might be too difficult to do. . .if it’s even allowed. Any suggestions you have would be greatly appreciated. Sincerely, Braid.”

Taking the email as a sign (though "Braid" assured me that this hadn't been her intent) that I have, indeed, become the person I’ve tried to deny having actually become—a middle-aged college professor whose life beyond researching, writing, attending conferences, and teaching revolves primarily around her cats (and more recently, photography)—I called my friend. “There’s got to be more, right?” I ask. “Well,” she says, “Hmmm. Maybe you can bring in some of your baskets of candy? Would that work? When I think of you, I think of all the candy you have squirreled away in your house.” Not wanting to haul the candy to class and (more than this) not wanting to have to explain why I won’t let anyone have some candy (i.e., because some of it, though I don’t remember which, is likely 2-3 years old), I ask again, “But isn’t there something else? There’s got to be something else that I do in addition to the research, writing, teaching, photography, and collecting candy, right?” I considered then how I might work into class discussion how much I like shopping at the dollar store but this road leads (as most others do nowadays) to photography. But the truth is, I like going to the dollar store because it's one of the few places i can drive to and because they have inexpensive frames, great deals on electrical tape for the holga, and because I’m always hoping that I’ll find a toy camera there. Students are more or less familiar with my aversion to driving so that aspect of my identity would hardly register as new or note-worthy.

But then I think about how I used to knit. (I’d never consider myself a knitter but I definitely used to knit.) Not being a fan of change, I thought the transition here would go more smoothly if I could carry with me into this new life aspects of, or habits associated with, my old life. Researching, teaching and writing articles was one aspect of my old life that would carry over here—giving me the sense that nothing much had really changed—but I thought maybe knitting could be another. Plus, I’d finally have a hobby. So, just prior to accepting this job and moving here, I’d asked a friend to teach me how to knit. I then began collecting and testing yarn at roughly the same pace I’ve been collecting and testing new cameras and film. Two poorly constructed scarves later, I became someone who used to knit. And someone with a ton of leftover yarn. Don’t get me wrong, I enjoyed knitting. And during the first semester or two, I would occasionally foreground this aspect of my non-professor identity as I found that knitting in class on large-group workshop days tended to provide students a chance to talk about their work and how it was progressing. I’d still be able to attend closely to what students said (perhaps because I could not afford to look at them for fear of losing my place, my listening skills were amplified or at least greatly enriched), but whatever part of my brain was most needed to stay on track with the knitting prevented me from talking too much. And this tended to work out well for everyone.

But knitting eventually fell by the wayside (though the baskets of yarn still remain front and center, strategically placed in different corners of the living room) and I’ve been thinking about why it is knitting never seemed to stick—why it never elicited the same kind of commitment or enthusiasm that photography has. Having always considered myself a book-learner (but being one who, in actuality, learns best by watching and talking about things with others), I think the main mistake I made with knitting is that after moving here I depended upon books for my information and inspiration. The truth is, I’d probably still be knitting if I had someone to knit with, someone from whom I might learn new things by watching what they do (and how), or someone with whom to simply discuss all things knitting. In comparing knitting to photography I certainly do not mean to elide their differences—the difference, say, between composing with yarn and composing with light—but, for me, my interest in both was partially motivated by the desire to experiment with new materials and composing techniques and to see if or how these experiments might map back onto (or transform) the way I’ve learn to think about composing things with/in words. If I could learn to compose something with yarn, where might that lead? What other materials might I attempt to weave together?

Had there been (or had I found) something like Flickr-for-Knitters three years ago, I might well have written back to “Braid” volunteering to knit something in class one day. How’s that for professor underlife? "Braid" (and her classmates) would then know that their professor’s underlife was not merely defined by cats but also decidedly informed by her passion for creating scarves, socks, hats, and the occasional tea cozy. Or maybe the reason why I never took to knitting has more to do with photography being a genetic, in-the-bloodline thing as there are far more photographers/directors/editors in the family than there are knitters. Though how this might inform the learning by observation/participation argument I’m hoping to make here doesn’t entirely follow. Rather, my sense is that after all those years of having to "pose," "hold still," "no--try that again!" and, finally, having to see myself in photos or in moving film makes a solid argument for my taking up knitting as a hobby. Otherwise put, I never had the occasion to play with cameras when I was growing up nor was I ever in the position to learn (or see) what happened between posing for a picture and then seeing the final result.

So I was a month or so into experimenting with film cameras this summer when I told my friend (not the candy friend, but another) that I hoped, within a year’s time, to try my hand at developing my own film. Like the good book learner I imagined I was, I ordered a bunch of books on the process, and began wondering then if maybe a more reasonable goal to set for myself was that within two year’s time I’d try my hand at developing my own film. At the time, I had been learning a lot from Flickr (or as I tended to refer to it throughout the summer as Flickr U or the U of Flickr). But my process was mainly one of searching for images I liked, trying to approximate them and/or looking at descriptions and tags to learn what camera the person used and (provided one like it could be had easily or cheaply) trying that camera. Otherwise put, I hadn’t really been using the discussion groups as a resource.

As I think about things today, I’m inclined to argue that the discussion threads were largely responsible for cementing my interest in, and enthusiasm for, photography as they revealed to me aspects of the process and potentials for experimentation that I wasn’t able to infer or glean from viewing specific images. (One exception to this would be the images of people’s at home development set-ups, images for which I've been incredibly grateful.) Bracketing off for a moment the most excellent discussions about modifications and the “how to unstick a sticky shutter” threads, where things really started kicking in for me is when I started running across (or seeking out) postings with links to videos and/or still images that illustrated specifically how people went about doing things. Though it’s decidedly text-centric (at least when compared to watching a video of someone going through the process of spooling film onto a reel or doing a Polaroid emulsion lift), I remain indebted to this site as it helped persuade me that I needn’t necessarily wait two years (or read a million books, take a couple classes, etc.) before trying my hand at developing b/w film at home. The experience of going through the motions once, twice, three times on my own (again, thanks largely to this site combined with videos that demonstrated what it looked like, what one needed to do, etc. to get the film from the camera into the tank), provided me with the a kind of foundation-for-experimentation on which I could build—something I want to argue that I didn’t really have with knitting—and it both informed and directed the kinds of information and links I sought in the discussion threads.

Certainly, this leaves me with little to offer "Braid"--this path too leads back to photography (and flickr and process)-as-underlife. But perhaps, just for old times' sake, I can find a way to justify devoting a potion of class time to having the class watch me watch videos on how to knit a scarf.

Posted by remediate this at 1:17 PM