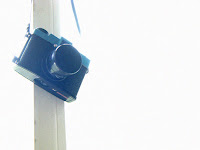 well, diana+ and i are (once again, what's new?) not speaking. if we were, i'm guessing the livingroom conversation today would have gone something like this:


me: sigh
diana+: [mocking me] sigh
me: what?
diana+: what?
me: wtf? quit mocking me--you're always mocking me. what's your problem?
diana+: i don't have a problem. the truth is, you've always been ambivalent about me. you don't think i pick up on that? the holga comparisons, the way you are always thinking, "why can't your plastic be thicker, sturdier? why does the loading and forwarding of film have to be such a grand production?"
me: so that's why sometimes you work and sometimes you don't?
diana+: 'xactly.
me: sigh
diana+: [mocking me] sigh

and it's true. i was more than a little disappointed when the diana+ arrived. and i did judge its weight, feel and temperament based on my interactions with the holga. truth was, i felt a little duped. the diana+ was the second film camera i purchased this summer (the holga was obviously the first). i had the camera shipped to my mom's as i was going home to participate in a relay for life event and figured that i could test out the diana--if not during that event, at least while i was at my mom's. i remember when the box arrived--how i couldn't wait to show my mom this new camera. i remember opening the box in front of her, lifting the diana out of the box and feeling. . .well, duped. the diana was about 20 bucks more than the holga was and it felt, well, like a two dollar camera. i liked the look of the diana but wasn't at all prepared for how cheap, how plastic, how delicate it felt. certainly not worth the 60 bucks or whatever i paid for it. maybe diana sensed, even then, my ambivalence, my doubt that anything good could come of (or from) this relationship. actually, i immediately regretted having it shipped to my mom's as i wondered how i'd get this back home without it ending up crushed into a million little pieces.

i got the diana home in one piece (well, technically three since that's what she comes with) and since june i've had occasion to take diana with me on other trips. but i have to say, when i take her out, load her up, i'm always thinking, "okay this will be a total crapshoot." and i don't mean "crapshoot" in the way taking any image with the diana or holga might be a crapshoot with lightleaks or other kinds of quirkiness. i mean "crapshoot" because i may or may not remember to take the lens cap off, the film might not advance easily (or seemingly at all). and even if everything on my end seemed to have gone all right, well, i can usually look forward to blank frames, to grossly over- or under-exposed images, to the sound of the shutter maybe working, and, yes, the fear always remains that diana will end up smashing (or being smashed) into a million little pieces. and the truth is, it does really bother me--how non-substantial this (not particularly inexpensive) camera feels whether in hands or hanging from the shoulder. often times, i left feeling just as duped as i felt when opening the box in front of my mom.

i'd like to say that i keep going back to diana+ because i like a challenge. and this would, i suppose, be half-true. one of the reasons i keep going back is that i want to be right and i want diana+ to admit it has been wrong. and part of me thinks that if i can work more successfully with diana+, i won't continue to feel duped.

to be fair, when the images are good, they are very good. although the image of the panda below always makes me sad, makes me want to cry (but this is basically true of animals in/and zoos in general), it remains one of my favorites. most tellingly though, i'm always misremembering things about this photo. i always think, for instance, that it was taken with the holga. (yeah, diana, i know. paybacks are gonna be a bitch.) 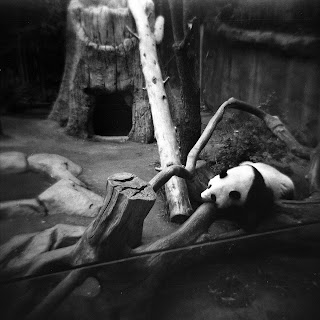 on my thanksgiving day pinhole woes: having recently claimed that there was nothing new i wanted to try on the photography front, it occurred to me that i wasn't trying hard enough to find new things to try. i turned to the alt group discussion threads and immediately learned about goop. half-truth: i saw this term there but had to search elsewhere to understand what it was. goop will have to wait since i've currently got non-goopable film in the polaroid and i've sworn that the next polaroid-related thing i'm going to try is an emulsion lift.

i've been fascinated with (and very much wanting to understand better and then to try) pinhole photography. i bought a couple of books pinhole photography but found this to be a very daunting prospect. i had taken a couple of pinhole shots with the diana months ago and thought that maybe i'd try my hand at this again and celebrate thanksgiving in a pinhole kinda fashion. since the matter of exposure times is one of the things i find most daunting about pinhole photography, i did a search on flickr and came upon this resource, put in an f-stop of 150 and printed out the exposure chart. diana+ and i (and my most sturdy tripod and dependable timer) were ready to go.

or three of us were, anyway. after setting up and taking/timing seven shots (the bulk of which were seven to fourteen minute exposures), i looked down and wondered if it was a huge problem that i'd neglected to flip the top switch from "N" to "B". i had the bottom switch set to "P" but couldn't remember if the top one needed to be on "B". i'm not, of course, blaming diana+ for this but it serves well as an example of why and how it is that we oftentimes do not get along well.

so fine. i develop this roll and since it's thanksgiving, i try not to focus on the seven blank frames that seem to be mocking me, and try to give thanks for the five frames shot after the lever had been switched to "B".

as i often find myself thinking/saying after working with diana+, "well, i guess i should be glad that there was at least one halfway decent shot out of the 12." (see phone image below) 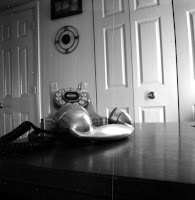 . . .not wanting to admit defeat--particularly not on thanksgiving, i optimistically reasoned that the image of the paintbrushes below might serve as a catalyst for going back and reading up on the parallax error since i've finally experienced it. 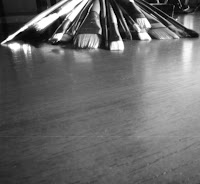 . . .and here's one for the learning curve: this 49 minute exposure of 2 cats sleeping on a bed. no muy bueno. but i'm glad i tried it. 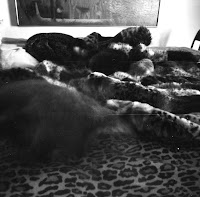 meanwhile: still committed to beating diana+ at her own game, i decide to reload but this time i use a roll of 400 speed film hoping that this might. . .well, speed things up.

and the good news--the great news, really--is all 12 frames had something scannable on them. not all of the images were good, but this hardly matters when it comes to my diana+ collaborations. what matters is that i saw something on the negatives for all 12 frames. there were, of course, a couple of accidental double-exposures. the not-so-funny thing is that these were almost back-to-back accidents. when i realized what i had done with the first botched shot, i moved the tripod upstairs, saying to myself, "okay, as soon as you get up there, don't forget to advance the film." but i did forget. and then i forgot again with the very next shot. could it be that there's something about my touching that most thin, fragile plastic body that automatically renders me, well, much denser, more thick-headed than usual?

but i really, really liked the mary jane shot (below) and the other two below that were okay-enough. mr. pinhole did say that the exposure times might need to be tweaked and where the mary jane shot is concerned, i really wish i would have gone longer than 13 mintues. all the shots, actually, could have used a little more light, a little more time. problem is, i'm not sure how much to increase things by--ten percent, twenty? i suppose once diana+ and i are again on speaking terms, we might work this out by restaging something like the mary jane shot and taking a series of exposures increasing the time by 5 percent, then 10 and so on. in the meantime, i've got some research to do. . . 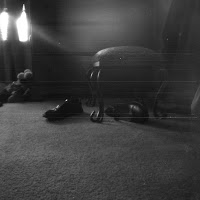 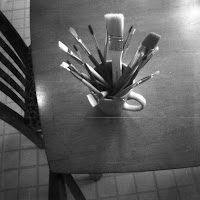 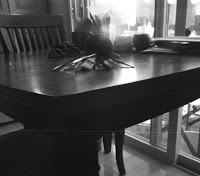 Posted by remediate this at 9:12 AM