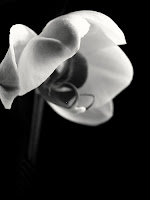 i've kicked around the idea for some time now of doing a personal favorite set (or something of that sort) on flickr. i resist, in part, because it seems self-congratulatory (i.e., suggesting that i see my flickr stream as a final showcase or display and not, as i see it, a sketchbook, a space for experimentation and play or, baldly stated, a laboratory. i also resist because i'm afraid i'd either have nothing or everything in that set. sitting here now and thinking about the images that i've taken that i've really, really been proud of, the first (and pretty much only) thing that comes to mind is the panda woe pic taken in san diego. it's the only pic i've taken that makes me want to cry when i look at it. then again, part of my fondness for it might be that it represents one of the rare occasions when diana+ and i were actually getting along. yet i'm guessing that if i started looking through the stream i'd want to add one or more of the gerber pics, one or more of the shasta daisy series, one or more from the cancer walk, one or more of the caffenol images, of the redscaled, and so on and so on. put otherwise, what i think my choices would reveal would be photos picked for sentimental reasons and/or those that represent a kind of first time for me--first time trying something new: a salt soak, caffenol, x-pro, etc. 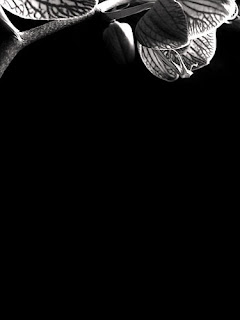 so what i've decided to do instead is to highlight or spotlight what i call "picks." picks are photos that represent times that i've tried something new. . .and usually trying that new thing has been motivated by something i've seen on flickr--seeing something there that makes me want to try my hand at what i've seen.

i took these orchid pics with the canon powershot s5 way back in may 2008--shortly after i started engaging in serious photo play but before i started experimenting with film and different kinds of cameras. one of my very first contacts on flickr (i think he's moved on, canceled his account, etc.) often posted images with black backgrounds. more specifically, his stream featured images were the black background dominated the frame. i loved this use of negative space but wasn't sure how to achieve the black background. for some reason, using a black piece of paper/fabric or, as i did here, shooting up against a leather jacket never occurred to me. when i began experimenting with the mostly white background (see image below) i would do this by shooting the plant/flower with a lot of light behind it, metering on the flowers and blowing out the background. of course, a little bit of photoshopping also came in handy for evening up the background. 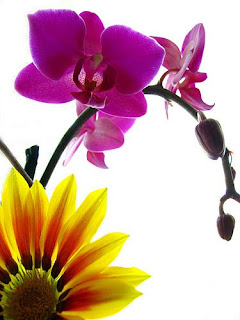 Posted by remediate this at 7:43 AM