a tale of two films

I guess I've been on something of an infrared kick. This all began because I was bound and determined to shoot a roll of IR in the Holga before the semester began. That said, there's something highly (and I mean highly) addictive about infrared--about what it reveals, what it allows one to see. I didn't want to use up another roll of 120, so I loaded the Canon AE1 Program with a roll of Ilford SFX 200, setting my camera's iso at 25. I was eager to see what difference, if any, it would make to shoot infrared indoors. This worked out fairly well as the first day of shooting was an overcast, rainy-ish day--not the best day for shooting outdoors. I was also eager to see what impact (if any) infrared film would have on skin. 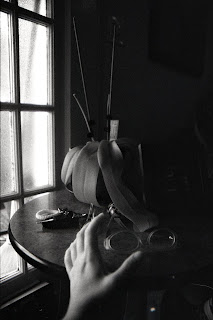 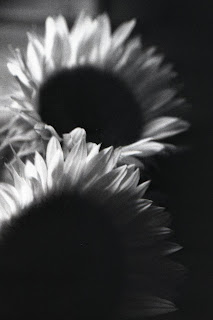 I was really pretty pleased with the flower shots and the soft, almost retro look I was able to achieve here. 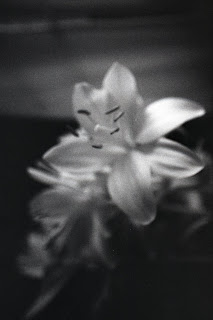 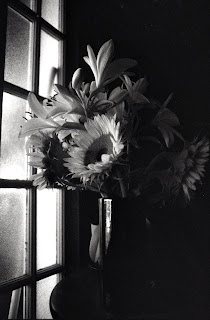 I think I shot about half of the roll indoors. The next day was a much better weather day, so I took things outdoors. My primary goal with the outdoor shots was to compare the Ilford SFX 200 (which, according to one poster on flickr is not a "true IR film, but a film with extended red sensitivity [meaning that] the IR effect will be less than 'real' infrared films") with Rollei 400 IR. What appears left and below is a sampling of the outdoor shots I took with the SFX 200. 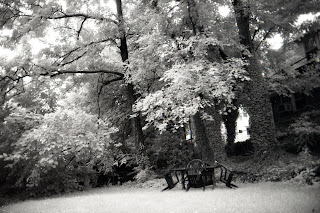 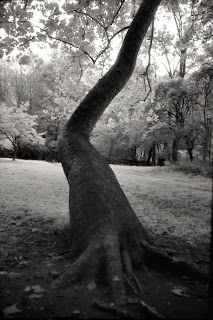 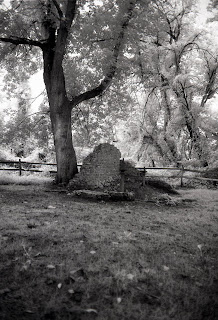 Here, by way of a visual comparison then, is a sampling of the images shot on Rollei 400 IR film, beginning with the image left, titled "Ruin," which is one of my favorite images from this shoot. It may be important to note that the day got increasingly nice (i.e., clear and sunny) as it went on. In this way, there were far more opportunities to shoot in direct sunlight later in the day (after I had loaded the camera with the Rollei film) than when I first headed out with the SFX still in the camera. This being the case, I can't offer as accurate a comparison as I'd like to have offered. Perhaps the fact that I was shooting indoors combined with the fact that many of the outdoor shots I took with the SFX were not taken in direct sunlight makes SFX seem, indeed, less infrared-y than the Rollei 400 film. I'd also note that I kept the camera set at an iso of 25 while working with the Rollei 400 film. Both rolls were developed with Diafine. For both rolls, I used my Visico 720 IR filter. 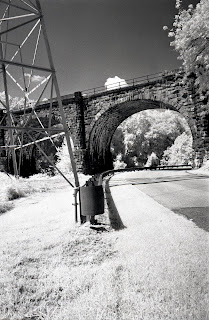 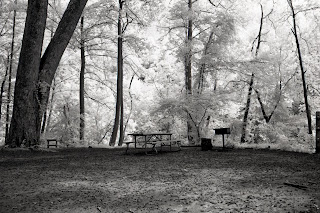 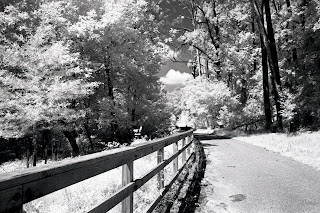 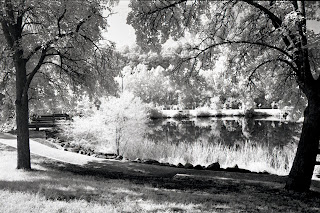 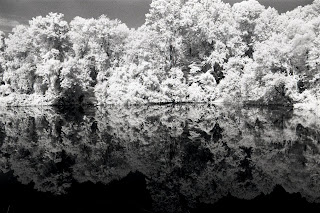 Posted by remediate this at 9:55 AM