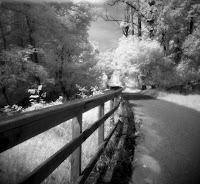 Finally. After spending the whole summer prepping for this event (perhaps I exaggerate? could it have only been 1/2 of the summer?), I finally got to take some Holga infrared shots! My plans were delayed by my inability to find and successfully purchase a Holga camera that was compatible with the cable/shutter release I had. [Long story short, I ended up buying a new Holga and a new cable release attachment.]

So yesterday, I reviewed my print out of this handy Holga/IR guide once again, loaded up the Holga with a roll of Efke IR 820 (non-aura version), my Visico IR 720 filter and headed to the park. As an aside: I am deeply bummed to learn that B & H has discontinued this film. They still carry the aura at 10 bucks a roll, but I liked the regular 820--it could be had when it could be had for about 6-7 bucks a roll if I recall. I had been tempted to develop these images with PMK Pyro but decided that I'd rather not confuse things. In other words, as this would be my first time using this film, using the Holga for infrared shots, etc. I wanted a kind of base-line for things. (Of course this was all before I realized that the film had been discontinued.) Instead, I used Diafine, using these guidelines for developing infrared--see entry to posting from eye of wally. The last (or first or only other) time I shot infrared, I did a Rodinal stand.

I was pretty pleased with the results--a sampling of which appears below. [I was super-duper pleased that the trip resulted in my finding a portion of the park I'd not visited before--yeah!]

As anyone will tell you, determining exposure times for infrared can be tough, so for most of these I went about 4 seconds, 2 seconds if the sun happened to be directly shining on the scene. (In so doing, I counted "1-2-3-4" and not "1-one thousand, 2-one thousand," etc. so my exposures might not have been true 4 second ones.) Generally speaking, the sky was bright with direct sun appearing only occasionally. Again, overall, I was pretty pleased with the results. I was very, very pleased, on the other hand, that I was finally able to get out and take IR images with the Holga before the summer ended. The only kinda quirky-annoying thing that happened--and it happened with most of the images on the roll--was that a light band appeared at the top left of each image. This band of lightness can be seen in the first image below. In some cases, the band didn't bother me, in other cases (as with the second image below), I felt the image was much improved when the section of the image was cropped out. Not sure what caused this, but it doesn't strike me as a typical Holga light leak--the banding seems to consistent and uniform for that. I had the camera taped pretty well but forgot to remove the 6x6 mask inside. I mention the mask, not because I think it played a role in this, but because I prefer to use the Holga without the mask--I like the rougher edges.

I've currently got the Canon AE1 Program loaded with Ilford SFX 200 film (I'm metering it at 25--might be too high?) and after seeing these results on flickr, I'm thinking that maybe I'll try a PMK Pyro dev on the Ilford. I'm eager to see what the fall light has in store for my new, infrared-dedicated Holga. I'm also eager to try the efke aura film. I just can't decide whether I want to try that first in a 35mm camera or buy some 120 to test in the Holga. 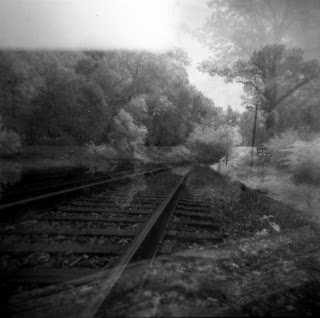 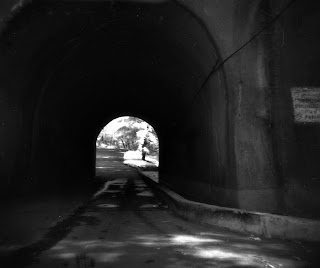 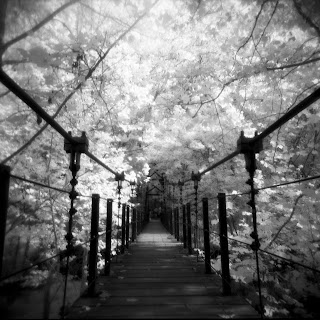 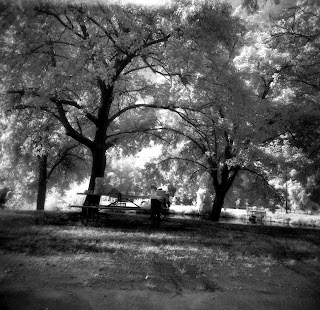 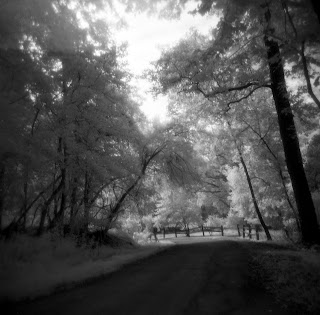 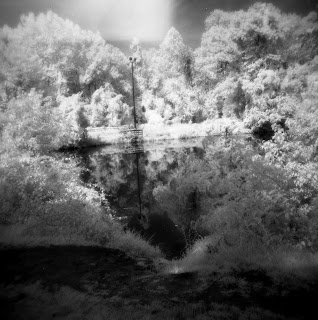 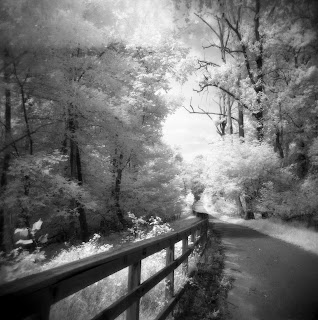 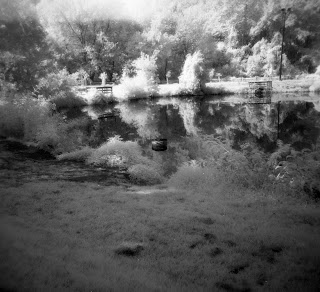 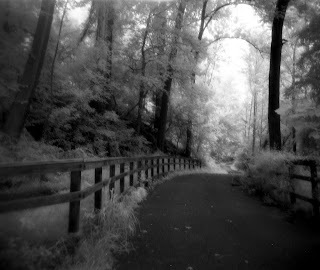 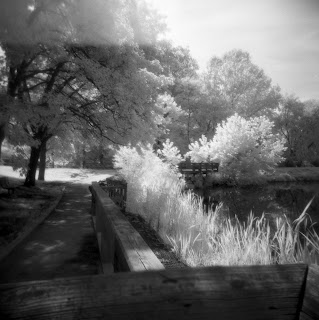 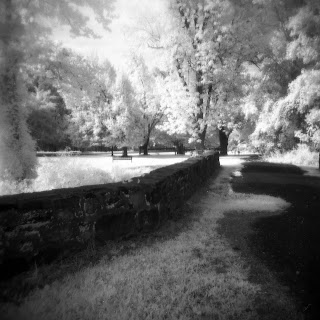 Posted by remediate this at 3:14 PM

These are great! Looking over my notes from my Holga IR shots, I see that the better ones were between .5 & 2 seconds in bright sunlight.

You also didn't get the unbelievable imprint of the film number on the image. I still have trouble believing this is from the film counter window, but who knows. Some of the shots might have turned out pretty well if the numbers weren't in the background. Maybe it's because they sat for a while before development, or the light leak, or, even, because they went through airport security (despite what I read about security having no impact on IR film).

See these screen shots taken from my scanner enlarger frame: this one, this one, and this one.

Well, after much playing around with scanner settings, I may have salvaged one.

Yes. Really odd. I've only gotten the numbers once but that was with a roll that I had to keep moving from one camera to another--a roll that suffered a lot of spooling and respooling. The kicker is that I loved the look on those shots and have always wanted to learn how to achieve this intentionally!

I have to say, I thought about you while I was shooting the Holga infrared. Based on what you said about your experiences, I really worried that the 4 sec exposures were way too long. In some instances, I think I might have doubled that. What film were you using?

And, finally, wow: I would never have thought to bring IR through the scanner. Interesting.

Wowsa, Bill. That image is wonderful! Love the sky!

My wife is like you: she likes the shots with the numbers on them. (Though I think she is just trying to be nice.)

I was using Efke AURA IR820 120 Black and White Infrared Film. I see you were using the non-aura version. I'm not really sure what the difference is between the two and haven't found anything online. Why do you prefer the non-aura?

And speaking of IR, take a look at these amazing panoramic shots by Kent Weakley.

Oh my goodness. Kent Weakley's work is amazing. Very inspiring. Thanks for letting me know about this.

I've not yet tried the aura but I have a couple rolls in the fridge. From what I understand the aura lacks the anti-halation backing the other IR films have and causes more of a glowing effect. Sounds really cool. Actually, the efke aura is the same price whether you go 120 or 35mm so I'm thinking that I'll likely run 35mm through the holga next time and see what's what!