If I've learned nothing else in the past 40-something years, I have learned that the majority of things I hope to have happen (i.e., earning a Ph.D., publishing a book, finding a hobby, dealing with my driving phobias) will, in fact, happen. Problem is, most of those things I hope to have happen will not happen when, where, or in the precise way I hope they will happen and/or as I had been envision them happening. 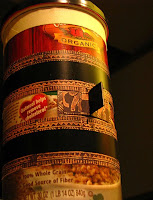 Case in point: I made this pinhole camera out of an oatmeal container back in December 2008. At this time I also ordered some really cheap 5x7 photo paper that I hoped to use to make paper negatives. . . .but then my plans for creating paper negatives kind of stalled out. In fact, about 4 months ago I finally gave up and packed up the oatmeal cam and put it into storage.

Part of the problem back in 2008 was that I didn't have a darkroom (read: I didn't have an enlarger or safelight, trays, tongs, etc.) Not that I really needed all that stuff and that was kind of the point for my wanting to do paper negatives in the first place. This was something I could do without an enlarger. Flash forward almost 3 years. I finally had an enlarger, trays, tongs, a couple of safelights. And, of course, I still had the photo paper I bought in 2008. Since the oatmeal cam had been packed away, I decided to experiment making paper negatives with other cameras, namely, an old 3A folding Brownie camera and my Zero Image 45.

The first couple of test shots I took with the Zero Image (a pinhole camera) were incredibly, incredibly underexposed, as demonstrated by the image to the left. I clearly need to do more research in this area but I'm completely confounded by the difference and/or similarities between stated ISO's for photo paper vs. film. Put otherwise, I had metered for the paper just as I'd meter for film. If a paper was reported to be 200, I'd meter at 100, figuring it would be better to overexpose an image than to underexpose it. This has proven to be a pretty bad plan. Most of the indoor images I've taken with the pinhole (and the majority of these have been 10 minute exposures) have been unusable and, frankly, hardly worth developing or saving. The image above was one of the better ones, in fact. My plan B was to assume an ISO of 4 or 6 for the paper (regardless of what the datasheets said) and figure exposure times as best as I could from there. 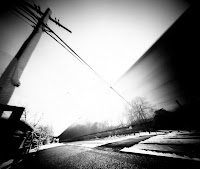 My results improved a bit when I moved things outdoors and greatly increased my exposure times. The first image featured in this entry, in fact, represents for me my first successful pinhole paper negative. It's not a particularly wonderful image, but when I placed the paper in the Dektol, something actually happened!

I decided then to go with a 40-90 second exposure testing time for any outdoor shots, figuring that I could further tweak things once I saw those results. I loaded up 5 film holders with 10 custom cut sheets of the most excellent Ilford Multigrade RC Express paper Chris recently acquired and we went to a nearby train station and then to the Thomas Viaduct (one of my favorite things to photograph in this area!) For the image above, I was able to set the tripod up and start the 60 second exposure just as a train came down the tracks. The ghosty triangular shape in the image is the train passing by. A sampling of some of the other images created that day appears below: 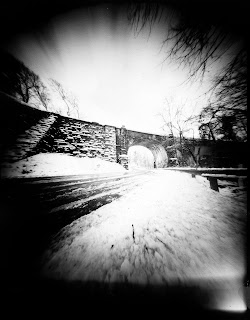 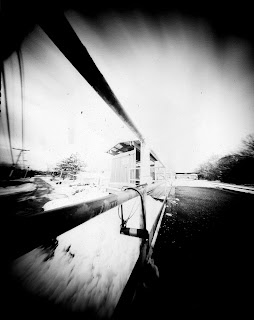 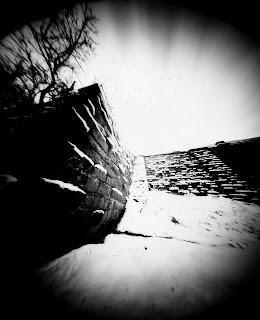 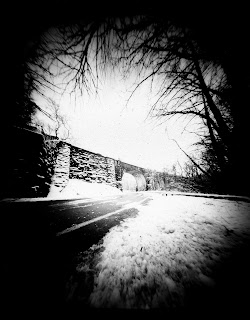 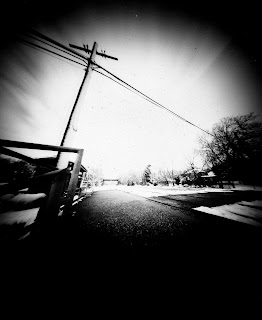