After thinking more about things I might have done differently during my first try with the chromoskedasic sabattier process, I decided to attempt it again. This time around, however, I made sure to choose images with "appreciable areas of white." I also decided to change up the method a bit, following a process originally outlined by William L. Jolly.

Jolly's method (or one of them, anyway) in a nutshell is as follows: A sheet of paper is exposed under the enlarger for about the same time one would expose it for the straight-up b/w dev. One could go with a little less exposure, but I didn't. Two of the three main images I worked with during this session were exposed for 12 seconds. The images were then developed in Dektol, diluted 1:2. Jolly recommends developing the image for 2/3 of the time required for normal development. In my case, I let the images develop for about 45 seconds to a minute. The developed image is then moved from the b/w developer into a "color developer." This is not a regular color developer (i.e., C41), but a mix made up of water, Dektol and both chemicals needed for the chromo effect. Jolly actually provides a number of recipes for the color developer, depending on the colors or tones one hopes to achieve (i.e., for red/olive; for magenta; magenta-brown/gray; orange/gray-green; slightly brown/gray), but I used what appeared to be the basic one, figuring that I could alter things if need be during my next attempt.

So to recap: After I pulled the image out of the b/w developer, I put it into a color developing solution comprised of 30 parts Dektol stock, 120 parts water, 24 parts stabilizer and 70 parts activator. [NOTE: I doubled the recipe as I knew there was no way that I could submerge the images in that amount of solution and the directions didn't indicate that the solution should be painted on or applied sparingly.]

Once the image was placed in the color developer, I agitated it for about 10 seconds and then let it sit there submerged in the chemicals for about 90 seconds. As an aside: Holy cow. I had been warned but the smell of the color dev was incredible. And not in a good way, but in an ammonia way. Holy cow. I made every effort to keep the container covered as much as possible; I also had the ceiling fan going throughout the session.

Thought the color dev process, Jolly advises people to check the image and pull it when the amount of color is satisfactory, but in all truth, it's really hard to see the developing image. Bracketing off the difficultly of really accurately seeing anything aided only by a 15 watt amber safelight, there was also the "black sludge of finely-divided silver that forms on the print" to contend with. I decided to pull the first image after 90 seconds and pretty much stuck with that for the remainder of the session.

Since the warmtone paper hadn't yet arrived, I decided to continue experimenting with the expired kodabromide postcard paper. It helps that this paper is so cheap. I didn't worry as much about messing things up.

I did vary up the process a bit. To start, I was submerging images in the color developer but then I decided to supply the stinky mixture more selectively. Here, for instance, is a triptych of Carl that features the original b/w image (note the "appreciable areas of white" here), an image where the color dev was selectively applied and, finally, an image that was completely submerged in the color dev for 90 seconds: 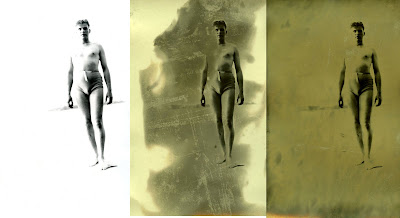 It's been really difficult to create scans of these prints that accurately convey what I'm seeing with these prints but, in person, the images look a bit like tintypes or sepia-toned images--a lot of metallic silver and gold-bronzey colors happening here. With that, I was fairly pleased.

But then came this discovery: When I pulled the images out of the water bath and began arranging them to dry on my makeshift blotter, I noticed that I could scratch them. What's more, I could take a paper towel and easily wipe portions of the color developer away. With the image left, for example, I removed some of the gold/bronze color from Nancy's body and tried providing other parts of the image with a bit of paper towel texture. Once the images dried, things became a lot more stable. I can no longer, for instance, use my finger to wipe color away or add texture. I'm assuming I could still scratch into it though, say with a pin or paper clip.

A sampling of some of the other images I processed during this session appear below--next time around, I think I'll experiment with a different color developer recipe--maybe the one that promised to result in reds/olives? 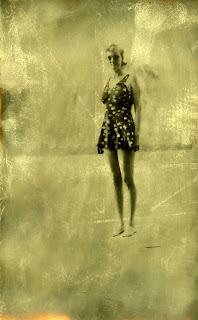 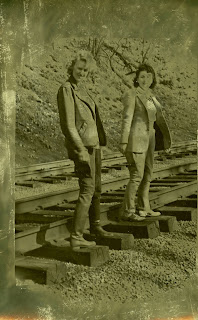 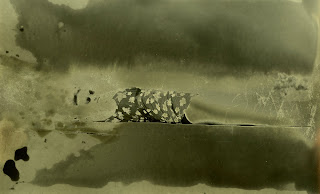 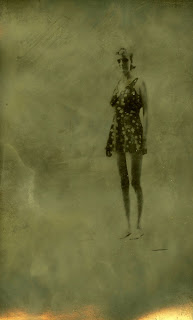 Posted by remediate this at 9:24 AM