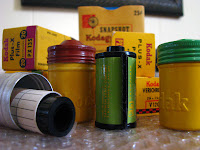 what a huge coincidence. this new lot of expired film arrived yesterday and shortly after i finished the post on found/expired films. the lot included a snapshot kodaguide, one roll of verichrome 120 (exp.feb '51), one 35mm roll of plus-x pan (exp. jan '58), one 35mm roll of plus-x pan (exp. mar '68), one roll of 35mm super-xx safety film (exp. jan '55) and one 35mm roll of tri-x. I'm not sure of the exp. date on this one since the box is missing. what's more, there's no leader here, so i suspect the film has been exposed.

as for the coincidental part: when i bought the lot, it appeared as though the silver canister (far left) was empty. when the lot arrived, i saw that it contained a roll of developed b/w negs. BONUS! more images to add to my found film set. If the green cartridge in the center of the image also contains exposed film, that could mean 56 more images for that set.

i've window-scanned a number of the negatives (featured below) and I also epson scanned a few last night. the problem is, I don't want to cut the negatives into sections so i was only able to epson-scan the first and last three images on the roll. hmmm. what to do?

It's odd to look at images someone else has taken. You wonder who they were and why these images? I'm considering developing the tri-x later today to see if my guess is correct here--that the film inside is, indeed, exposed. what are the odds that it's held up, will develop, etc. if it has been? I suppose in a worse case scenario, I could develop the film and find that it hadn't been exposed. . .I'd be kicking myself then for not running it through a camera. So it's a gamble (and i"m not a gambler)--I can develop the film and hope for the best or I can run this through one of my cameras and hope for the best in terms of decent double exposures. UPDATE: I decided to develop the roll of tri-x and it was no bueno. It looked like the film had been exposed--there were shadows on the film--but no images showed up (or turned out). boo. 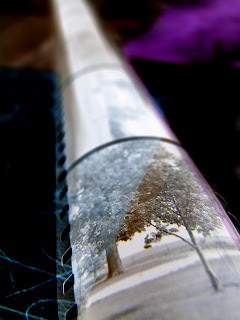 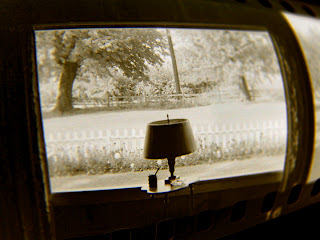 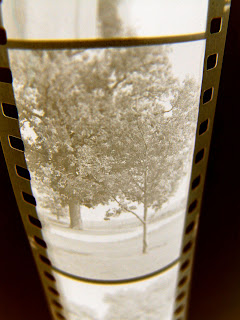 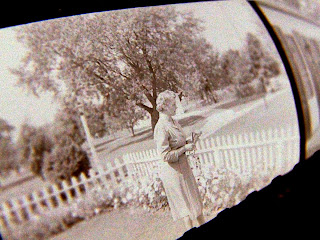 Posted by remediate this at 8:53 AM