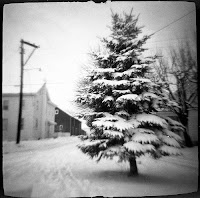 Perhaps the only thing better than finding unexposed expired film for cheap on ebay or in a resale or antique shop is finding exposed expired film in a camera you find for cheap online or in person. I got a windsor diana clone as part of a lot of cameras I bought a couple months ago. Actually, the only reason I even bid on the lot was because of the windsor. As I recall there were a number of 126 cameras in the lot, disc cameras--stuff for which you can't get film. But I saw the diana clone and figured this was a cheap-ish way of getting the camera. (Things on ebay marked as diana clones can get insanely expensive--this just said that a windsor camera was included in the lot.)

I was delighted to find that two of the cameras from that lot had exposed film in them. (In all, there were probably 7-10 cameras in that lot that had film in them but there were only two that had b/w film in them with most of the roll already exposed.) The two images here are from the windsor. There was also a tech model 72 126 camera with film in it. When I was in maine this fall, I picked up a kodak instamatic x-15 with film in it for 4 bucks. Ironically, the x-15 had been part of the lot referred to above, so I didn't technically need another. I just wanted the film inside. I asked if I could just purchase that--the woman at the antique store said no, i had to buy both parts. To be clear: I wasn't looking to save money--I just didn't want to lug home and then find a place to store another camera, particularly one I wouldn't really have occasion to use. The images from the found films can be viewed here. 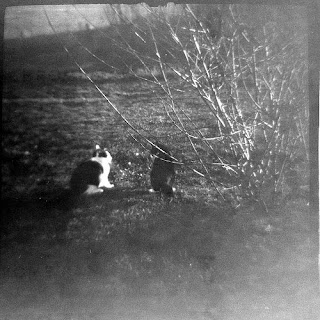 Posted by remediate this at 9:27 AM