As I happened to have in my possession the proper chemicals along with a handout titled "Quick and Easy Chromoskedasic Sabbattier," I decided this morning to try my hand at this rather daunting process. Yipes. Okay. To be fair, it wasn't that the process was even that daunting. It had more to do with me. Specifically so, with my resistance to following some of the key tips offered throughout the very short handout, such as: 1.) For best results, use warmtone paper [I didn't have any but it is on order]; 2.) For best results use an image with "appreciable areas of white" as the colors "will only appear where there is white in the print" [I was Sir Speedy this morning and just grabbed whatever negatives I could find], and finally, 3.) "Don't rush the process." [Again, I was Sir Speedy and rushed everything, including, apparently, carefully reading the whole handout.]

What I liked about the handout was this--the way it began: "Chromoskedasic is a unique darkroom process that provides fun darkroom experimentation for these who like to put 'play' back into the darkroom" (emphasis added). A few lines down, there was this: "Saying the word 'chromoskedasic' is more complex than doing the process, ultimately. It is a perfect one to teach to students to loosen them up in the darkroom." Yes! Loose, easy and playful! I really liked these lines and they were, I think, largely to blame for my thinking that I could stop attending carefully to the handout from that point forward. Indeed.

Yet had I kept reading, I would have encountered this next cautionary line: "However, as with any experimental darkroom process, matching the correct image to meld well with the process is key." Like I almost said to start: "Ooops."

Having had time to revisit the handout, what I can say by way of the process proper is this:

The quick and easy version of the process involves the use of two chemicals, a stabilizer and activator. Both chemicals are mixed 1:4 in separate containers. A negative with "appreciable areas of white" is exposed on photo paper and developed as usual. [Note to self: This does not mean that it is selectively developed, even if this is one's usual way of doing things.] The image is then drained and rinsed in a water bath for half a minute. At this point, the normal room lights can be turned on and the print is placed in a flat-bottomed tray. Warning: At this point, the unfixed image will begin to change color--mine became bluish-purple. The stabilizer is then painted selectively across the image. At this point, the darker colors should have turned yellow. I got a little of this at times, but I was definitely expecting more yellow. After a minute or two [Note to self: You should have actually waited a minute or two] the activator is selectively applied in places one "desires a dark brown shift. " Sigh. 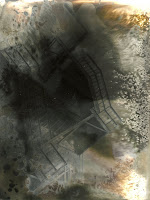 Now this image of the staircase at the psychiatric hospital up the street could have been really good. Really. This was the first image I experimented with. Everything was going swimmingly as I was actually getting some browns and purples and reds in the image. Thinking that more is necessarily always better [as I'm learning though, where the darkroom is concerned the opposite seems to be true], I decided that I desired "silvering out" and began selectively spraying the image with dektol developer. [Note to self: Find out what "silvering out" is before deciding you desire it.] I repeat: Ooops. The image just smeared. And kept smearing. Perhaps the directions should have read instead: "If smearing the entire image is desired, spray it with non-diluted dektol."

Feeling fairly confident that I had messed this up, but not wanting to appear to be a quitter and spoil-sport, I finished off the process as recommended by rinsing, fixing and washing the image.

I tried another image of the stairs at the hospital. There was a wee bit of color shifting happening here. I was hoping things were moving in the right direction.

. . .I was hoping. But things never quite took off. There were some interesting effects/textures happening here, but not the pronounced color shifts I had been expecting. By the by, this is kinda what hoping for.

Reasoning that a warmtone paper or a better set of negatives might, in fact, have made an "appreciable" difference in my work, but not wanting to waste the chemicals, I grabbed one of my favorite "found" negatives, deciding to finish out the session by testing the different papers I did have on hand. A sampling appears below: 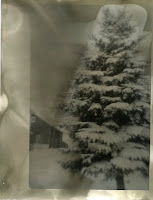 arista VC paper developed with dektol
Posted by remediate this at 4:15 PM